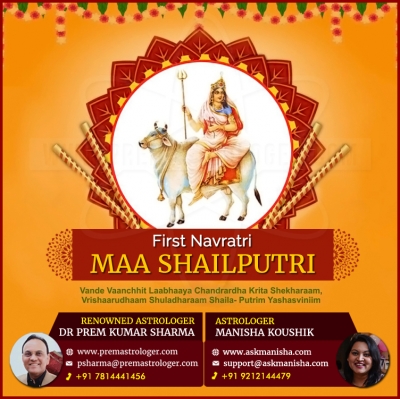 Navratri is celebrated to worship nine different forms of Maa Durga (mother goddess) who is considered to be source of ever-flowing energy. The God is by nature motionless, absolutely changeless and Maa Durga is, actually, responsible for all the actions and reactions of the universe. It wouldn't be exaggerated, if we say that the worshipping of Maa Durga only re-confirms the scientific theory that energy is imperishable; it cannot be created or destroyed; it is always there.

The first day of Navratri is dedicated to Mata Shailputri. 'Shail' stands for mountain and 'putri' stands for daughter, meaning the daughter of mountain. She is also called Parvati who is consort of God Shiva/ Mahesh (the god of destructive forces), mother of Ganesha and Kartikeya, and the daughter of the King of the mountains, Himavan. In this form, she appears with two hands with trident in right hand and lotus in left; half moon adores her on her forehead. She rides Nandi, the bull, wearing white or pink coloured sari. Maa Shailputri is considered the embodiment of the power of trinity: Brahma, Vishnu, and Mahesh.