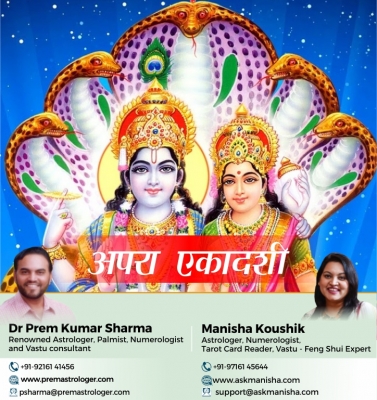 Apara falls on Ekadashi of Krishna Paksha, Jyeshta masa. Another name for the same is Achala Ekadashi or Vaishak Vadi Ekadashi. It seems to be equivalent in terms of fruits like conducting pind daan, or bathing in the kartik month or bathing in 3 pushkars. Virtues obtained by people of leo sign on bathing in Gomti on Thursday, or by vision of Sri Kedarnath at the time of Kumb, or by staying in Badrinath, or bathing in Kurukshetra during solar and lunar eclipse or donating horse, gold, land or observing yagya is equal to the fruits of Apara Ekadashi Vrat. It is observed from the sunrise to the sunrise of the next day.

Celebrated in: Almost people of every religion and caste will abide by it in their own way. Apara Ekadashi is also celebrated as Achala Ekadashi, Bhadrakali Ekadashi, Viashakha Vadi Ekadashi and Jalakrida Ekadashi in various parts of India. In northern region like Punjab, Haryana  and HP it is celebrated as worshipping Goddess Bhadra Kali while in Orissa it is referred to as Jalakrida ekadshi.

Significance: Devotee if observe this fast by performing all the tradition then it is believed that he or she gets free from all the wrong doings that he or she has committed in the past. To name few are Brahmahatya or parinanda or false lectures or suggestions etc. It overall increases the health and wealth of the person and makes him popular across the country. It other means will take into consideration all your good and bad doing and then by measuring them all will give you the accurate results. Fasting increases the strength of the body and also makes the immune system more stronger. The system inside the body at least got rest for one day and will be in full swing afterwards to digest any kind of material. It is sometimes referred to as overhauling of the inbuilt system. It will purify or refine the mind and the body.

Pooja Vidhi: It is different in its method as compared to other Ekadashi. It activates for the period of more than 24 hours. It begins a day before the Ekadashi. The positive vibes should spread all around the area of the vrat and it will results by having positive mindset. Leave the tensions and worldly pleasures thoughts and just concentrate towards the sacred deity. You should not have physical intercourse and also sleep on the floor. For the time being you are not suppose to take benefit of all the pleasure that you have at home. Some adherent also keeps fast for the whole day.

Wake up early in the morning and complete the household chores immediately. Then rinse the place with the ganga jal where pooja is to be conducted. Then lionize Lord Vishnu and have material like incense lamp, sticks, flowers etc with you so as to offer them all to the deity. Some devotees also hear stories elated to it and conduct jagran and aarti. Devotees sued to go for tirth snan or donations or yagya and many other forms of pooja to request the deity to have soft eyes on them if intentionally or unintentionally they did anything wrong. The person will surely attain the almighty soul if conduct it with full dedication. It is the form of atonement which everybody wants to have in their life once.

Legend: Once upon a time, there lived a religious king named Mahidhvaj. His younger brother, Bhrajdhvaj, was a cruel, sinner and unjust person. He used to hate Mahidhvaj. One night he killed his elder brother. And he buried the dead body beneath a Pipal tree. Now he started showing violence to the Pipal tree. Accidentally, one day, a Rishi named Dhumya passed from there. Then, Rishi advised him to observe the fast of Apara Ekadashi and get free from all his sins, in order to live a peaceful life.

Doâs: Fruits, Sabutdana khichdi, vegetables, nuts and milk are the few eatables allowed in every vrat.

Q: Why to avoid grains on this day?

A: It is believed that demon Mura found a dwelling place in the rice and Lord Vishnu appeared in the form of Ekadasi to annihilate Mura. Therefore devotees who fast on the Ekadashi day avoid food made from grains.