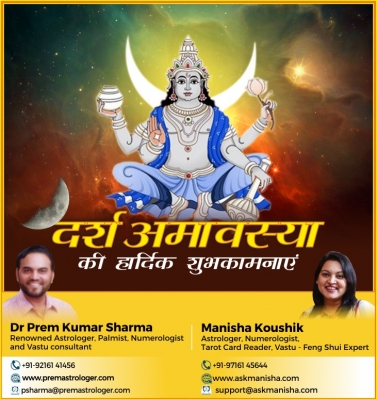 Darsha Amavasya â The day to do tharpan of ancestors

Amavasya or Amavasi is considered as the day when the moon is not visible in the sky. We can also say that Amavasya is the no moon night in Hindu tradition as per the lunar calendar. In the first quarter of the lunar month, this is said to be the first night. Although even today religious people debate on whether to call Amavasya an auspicious or inauspicious. Here we can thank our cinema where it is shown that all black magic and evil acts are performed on Amavasya. Earlier it was advised not to travel on an Amavasya night, as there is no moonlight and this could invite a danger.
If we talk in symbolical terms, the period from Amavasya to Purnima can be considered as the gradual awakening and transcendence into the fullness. From darkness to the gradual realization of the Supreme Soul, what we say "Tamso ma jyotir gamayâ.
In every part of India, the term âAmavasyaâ is commonly used. In different states, it is called with different names and is b=observed in different months too. Like in Magh month is called âMauni Amavasyaâ and in Ashwin month it is called âMahalya Amavasyaâ. In Tamil Nadu Amavasi in Aadi month has immense importance. In Kerala Amavasya in Karkidakam month has significance.
In Hindu Mythology, Darsha Amavasya holds great importance. On this auspicious day, Hindus do tharpan of dead ancestors. It is said that you get multiple benefits if you do fasting on this day. People do fasting dedicated to Chandrma or Moon.
The fast on this is observed with proper ritual and vidhi, which is as follows:
â¢ In Hindu Mythology, Chandradev is considered the most important Navgrahas. He is known as the lord of emotions and nurture of plant and animal life.
â¢ It is said that people who worship Chandra dev on this auspicious day gain good fortune and prosperity in their lives.
â¢ It reduces delays and reversals in life.
â¢ Worshiping Moon on this day can help one gain spiritual sensitivity
â¢ This day is associated with wisdom, purity and good intentions.
â¢ Worshiping forefathers (known as Pitra in Sanskrit) on this day is considered as the most important part of the day.
â¢ Many worships to achieve Moksha (completing the circle of life and death) and also attain their wishes and blessings for a good fortune.
The fasting on Darsha Amavasya starts on the morning of Amavasya Thiti and lasts only after sighting the moon on the Chandra darshan the next day.
The Shradh ceremonies performed to the ancestors on this day can clear the sins and pitra dosh and can win the blessings of the ancestors for the health and happiness of the family members. Many worships to achieve Moksha (completing the circle of life and death).