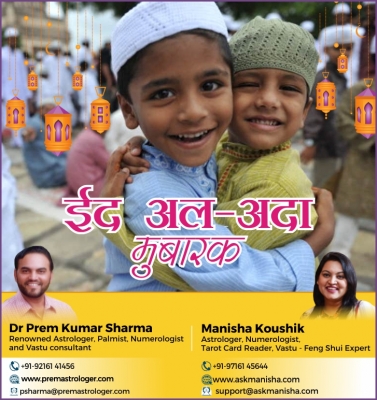 Eid Ul Adha is celebrated every year with a lot of happiness and enthusiasm. It brings happiness to our lives. Moreover, it gives us an opportunity to take a break of hectic life schedule to celebrate it with much enthusiasm. Islamic calendar goes on observation of the Moon and the length of a particular month keep varies from year to year.

How People Do Celebrate â

It is one of the prominent festivals of Muslims. They celebrate Eid al-Adha with a lot of fun and enthusiasm.  Many Muslims make a special effort to pray and listen to a sermon at a mosque.  On this auspicious day, people also wear new clothes and wishes each-others. Moreover, people also visit family members and friends to have a get-together. Saying would not wrong that this kind of festival also brings closer to each other. This festival would not be considered complete until it is mentioned about the sacrifice of an animal in an act known as Qurbani. The motto of this ritual is showing sacrifice one should have to follow a religion.

What Is Done On This Auspicious Day â

On this day, families or groups go out to purchase an animal called Udhiya. It could be either goat or sheep. Buying animal is not legal in every country such as Canada, New Zealand, Australia, Canada, etc. However, some traditionally Muslim countries consider it legal as it is a ritual to perform to showcase sacrifice. Some people also celebrate this festival giving money to the poorer member.

It is also considered auspicious to travel to Mecca and the surrounding areas in Saudi Arabia in order to perform the Hajj Pilgrimage. Moreover, companies also introduce package holidays. Moreover, some Muslims also plan to visit place saving for many years who enable them to take part in this event.

People also do fast on this auspicious day. The first, Eid al-Fitr, goes quite longer following lasts several days and end up on the name of Ramadan, the holy month of fasting. And the second one is known as the Greater Eid or Eid al-Adha indicating towards the sacrifice Ibrahim did in the form of his son Ishmael as an act of obedience to Allah.

Ibrahim also regarded known as Abraham in the Christian and Jewish religion. He was ordered by God to sacrifice his adult son. He did not hesitate to follow God. He obeyed and took Ishmael (Ismail or Ismael) to Mount Moriah. This festival is celebrated to memorize what sacrifice he did.

Since it is one of the biggest festivals, there is a public holiday in prominent countries such as

Though it is not a nationwide public holiday in every country including Canada, Australia, The United Kingdom, and the United States. On this auspicious day, some Islamic organizations also remain close or get indulged in imparting services.