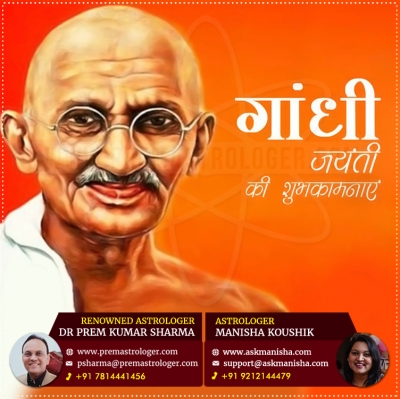 Gandhi Jayanti is a National festival in India. It is observed on 2nd of October every year. Mohandas Karamchand Gandhi was born on 2nd October, 1869. He is famously known as Mahatma Gandhi. Mahatma means "Great Soul”. He is also known in India as the "Father of the Nation”.

The day of Gandhi Jayanti is dedicated as a tribute to Mahatma Gandhi. He was a great leader of the Indian Independence Movement. He launched the famous "Quit India Movement” to drive the British out of our country. This day is a gazetted holiday in India.

Three locations in India play important roles in the celebrations of Mahatma Gandhi's birthday. These are:

3.       The Triveni Sangam where the rivers Ganga, Yamuna and Saraswati come together near Allahabad.

The Father of the Nation was a well read man and an avid writer. His philosophy of ahimsa, satyagraha and civil disobedience still remains a potent guiding force in people’s lives and has helped people across the world to garner courage to oppose discrimination. He wrote several books during his lifetime: An Autobiography- The Story of My Experiments with Truth; Hind Swaraj or Indian Home Rule; Key to Health are some of the books penned by him. Mahatma Gandhi’s life was one of selfless love for one’s country, and through his hard work, self-restraint, truth and non violence, he ignited hope among fellow Indians to achieve what they aspire for and protest against discrimination at various levels.