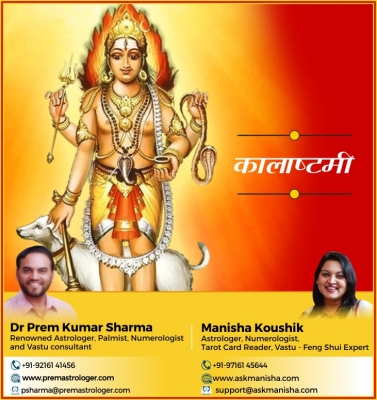 Kalashtami or Kala Ashtami is one of the prominent Hindu festivals. It associates to Lord Bhairav and devotees celebrate it with a lot of happiness and enthusiasm this a special festival is celebrated on every Hindu lunar month on the ‘Krishna Paksha Ashtami Tithi’.

Why It Is Called Kalashtami -

This festival named Kalashtami since it is celebrated on the ‘Ashtami Tithi’. Ashtami is the Sanskrit word which means the 8th day after ‘Purnima’ ( Purnima means the full moon night). According to mythology, the 8th day after Purnima is regarded as the most suitable day to worship and make Lord Kaa Bhairav content. In this day, Hindu devotees worship Lord Bhairav following all the standard rules. This fast plays a crucial role to make Lord Bhairav happy and content. A year holds a total number of 12 Kalashtami.

The Most Significant Kalashtami-

Though there is a total number of 12 Kalashtami comes in a year, one falling in the month called Margashirsha is considered the most important. This one is called Kalabhairav Jayanti. Mythology also says that it becomes quite holier if it falls on either Sunday or Tuesday. These both days are completely dedicated to God Bhairav. This festival is celebrated all across the country with the same enthusiasm among the devotees.

For Lord Shiva’s devotees, Kalashtami is regarded as the most important day. On this auspicious day, devotees wake up early in the morning right before sunrise. They take a shower after getting done with their daily chores. After getting ready, devotees perform special puja of Kaal Bhairav following all needed rules. It is believed that God Bhairav forgives their sins and makes them free from guilt. Moreover, Lord Bhairav also shields their favorite devotees to keep them away from the negative and bad vibes. His divine blessings keep their devotees safe and happy.

This day, devotes also visit the temple of Lord Bhairav to get indulged into the spirituality deep down. It is said that Kalashtami is actually the fierce form of Lord Shiva. The motto behind taking the embodiment of Lord Bhairav was bringing Lord’s Brahma’s anger at an end.

Devotees also keep a strict fast on this day keeping themselves away from materialistic things and other fascinating stuff. Moreover, listening to the stories of Mahakaleshwar also makes them know the significance of this day.  One who keeps fast on this day and worships Lord Shiva with full faith get blessed with prosperity and happiness in his/her life. It is also considered ideal if you recite Kaal Bhairav Katha on this auspicious day and keep chanting the mantras dedicated to Lord Shiva.

There is also a custom to feed dogs on this day and it should be a black dog. Lord Bhairav vehicle is a black dog. You can offer milk, curd or sweets.

The word Kaal stands for "Time” in Hindu religion. In addition, Kaal Bhairav indicates the embodiment of Lord Shiva. Kaal Bhairav means "God of Time”. As per the Hindu mythology, Lord Shiva got angered on Lord Brahma because of passed a remark on him. He took the form of "Mahakaleshwar and cut Lord Brahma’s 5th head. From that time, he is being also worshipped as Kaal Bhairav.

It is also believed that no negative vibes can harm you if you worship him with full trust and faith. He is known to guard their devotees from negative energies. Worshipping Lord Bhairav can take all your grief, pain and issues from your life leaving you peaceful. Do worship Kalashtami to stay blessed by Lord Bhairav. Being spiritual brings positive energy to you.