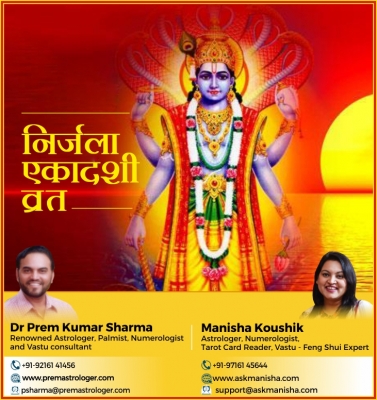 If any Ekadashi fast or vrat is supposed to the hardest known ever, then it is none other than this vrat. The 11th day of the fortnight when Lord Vishnu is lionized is the suitable time for it. All the widely known calendars have their own respective timing of this fest. Another nomenclature associated with it is Pandav Bheem Ekadashi or Jyestha Ekadashi fast. The sacred item which is allowed in all other type of fast i.e. water is not allowed in it which raised the bar of toughness of observing it. It falls during the waxing phase (Shukla Paksha) in Jyestha month.  This single day has the combined powers of all the Ekadashi vrat which is cumulatively counted as 24. The name is self descriptory which means "without waterâ. The time span is from the predawn of the Ekadashi day till the sunrise of the next.

Only the second Pandav among the five got the chance to know about the importance of this vrat by Sage Vyas. It showers its blessings just before the monsoon season. Ekadashi is also called as Hari-Vasara.

Celebrated in: Mostly people of every origin and religion know the importance of this vrat. So it is difficult to name the areas instead virtually whole India observe it with full respect.

Significance: The act of evasion of other Ekadashi vrat to whatsoever importance it may have is fulfilled by keeping fast of this sacred day. The fruits which one get by going to any consecrated destination is tantamount to observing it at your home. The people who keep this fast till the time they are alive will get the heaven which is the abode of Lord Vishnu instead of Yama Devta. When the Ekadashi completed her task of killing demon Mura then under the feeling of ecstasy the deity gave her the blessing as whosoever discover this day will get moksha for sure. By acquitting this fast one can get rid of all the sins and mistakes committed in the past and also it helps to enlighten his or her future path in the right direction.

Pooja Vidhi: Neither the food nor the water is allowed to intake. Traditionally it is allowed to have water which have one mustard seed dipped in it. This process is called the purification process which almost everybody has to go by if sees this day. There is the feeling of gay and joy everywhere and people usually found in reciting the songs or bhajans related to this day. Many of the devotes used to listen or read the storied in the most respected books like Bhagvat Geeta or Puran. Not a single verse or song or story which is adhered to the Lord Vishnu is left unheard by the staunch devotee.

The ceremony begins with the early cleansing of the body and starts with the pooja of Lord Vishnu by offering the material like flowers and Tulsi leaves. Visiting the Lord Vishnu temple is the important activity which everyone used to conduct.  Married women observe it with full dedication and devotion. While opening the fast person should also donate food, clothes, milk, honey.

Pooja material: A picture or photo or idol of Lord Vishnu, Fruits, Tulsi leaves (The tulsi leaves should not be picked on the day but on the previous day), Yellow bananas, and other normal pooja items

Legend: Mura, a demon of past time was killed by the Goddess Ekadashi which is believed to be incarnated by Lord Vishnu.

Once Bhima asked Veda Vyasa, who is also the grandfather of the Pandavas, to help in observing the Ekadasi Vrata. He said that Yudhishitra, his eldest brother, always asks him to observe fasting. He is ready to pray and give charity and observe all the rules but not fasting. And if there is no other way out he is ready to fast on one Ekadasi out of the 24 Ekadashis.

From that day onward Bhimasena began observing Nirjala Ekadasi and it came to be known as Pandava Nirjala, or Bhimseni Ekadasi.

Q: Which section of people can avoid it?

A: Usually it is not considered to be mandatory for all to observe fast on any given day. It comes from the inner zeal and dedication. But ill or working or professional can avoid it. They can get the blessing of the deity by hearing the stories at night and by having the Prasad. But still if someone is adamant to have it then another version of it which is called to be Partial fast can be observed in some food items are allowed except water.  What is more important is the pure feeling rather than the protocols to be followed.

Donât: Completely abstain anything made up if rice, grains, honey. Do not apply oil instead donate it. If possible then avoid sleeping in the night and dedicate the night in the realm of the deity.

Doâs: Before conducting pooja you should take bath. If pooja is at morning or afternoon or evening then all the time before it bathing is necessary.