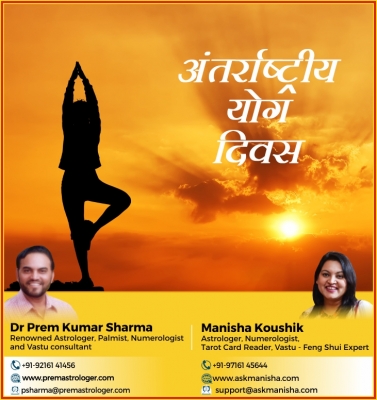 Yoga is not a new keyword since it holds a significant role in Indian culture. Yoga is indeed a beautiful amalgamation of physical, spiritual and mental practice that brings incredible benefits to your body. Yoga is a Sanskrit language word having meaning to joint or unite. To put in simple words, it indicates the union of body and consciousness both at the same time. Yoga holds a wide array of forms to target different areas of your body. The popularity of Yoga is high in demand.

Talking about the prominent objectives of world yoga day, there is a long list. The prominent ones have been mentioned below such as -

ï¿½        First, it is quite helpful to let people know about the benefits of Yoga.

ï¿½        To make people know the significance of meditation.

ï¿½        To emphasize the holistic importance and benefits of Yoga

ï¿½        To encourage people to have a healthy lifestyle

Within a short span of time, Yoga has grabbed a lot of popularity at the forefront. United Nations announced 21 June as the International Day of Yoga. The motto of celebrating International Day of Yoga is increasing awareness all across the world in the context of the benefits of practicing Yoga. Talking about the previous themes that made Yoga highly popular is "Yoga For Healthâ in 2017, "Connect The Youthâ in 2016, and "Yoga For Harmony and Peaceâ in 2015.

You might be curious to know about the 2019 theme.  Here, we are going to emphasize it. Yoga with Gurus will be the topic of discussion will hold on June 21. Indian Prime Minister proposed the idea of celebrating International Yoga Day to create awareness all across the world. The glory of Indiaâs glorious history will always remain incomplete with Yoga. It does not on focus over your body but on the mind, thought and actions too. Yoga helps to create a connection between man and nature. You got to know about your abilities and the power of the mind. Following a healthy lifestyle, you can achieve the goals of your life. It is quite important to have a strong will power to accomplish them.

The fact cannot be ignored that the origin of Yoga is actually shrouded in mystery.  According to the profound history, it is considered that Lord Shiva is the father of Yoga. Moreover, Patanjali is considered the father of modern Yoga. Rishis and Munis used to do Yoga earlier to stay fit and healthy.

This year, the theme of Yoga day is going to be "Yoga For Heartâ. Yoga has changed the life of many people all across the world. Moreover, it has also increased the interest of people in Indian culture. Many institutions have opened encouraging Yoga. Moreover, experts are also giving training to beginners. It indicates how it is getting popular on a large scale.

And The Last â

So, what are you waiting for? It is time to go ahead and start practicing Yoga from this year to see the significant changes in your life and perception.