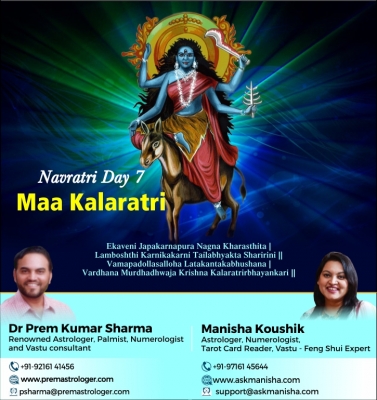 The seventh manifestation of Durga is Kaalraatri. This is the fiercest form of Navdurga. She appears with four arms and three eyes which are round like universe. She holds a sharp sword in her upper right arm and her lower arm is in blessing gesture. There is a mashaal (burning torch) in her upper left upper arm and lower one in the gesture of providing protection.  She wears a necklace shining like lightening and sits on a donkey.

She is the goddess who killed the Raktabeej, the demon who produced a demon like him from every drop of blood that dropped from his body on the ground. In the war with the demons, the goddess eventually licked the blood before it could reach the ground and consequently got him killed.
You should worship Maa Kaalraatri for wiping out any bad effects arising due planetary positions, mending bad relationships and opportunities. Any type of fear disappears by chanting of Kaalratri mantra. You can revive old stuck business activities or relationships on this auspicious day. Specially empowering energy constantly flow from her eyes to all the beings during throughout day and night during Navratri. True faith, restraint and concentration are necessary to invoke her.
On yogic sadhana, the sadhakâs (striverâs) mind enters Sahasrara Chakra. The door of all Siddhis of the universe start opening for him. On this day, the Sadhaka with all his faculties is identified with the mother Kaalraatri. As a result of Motherâs darshan, the Sadhak becomes able to earn all sorts of virtues.
Kaalraatri form of Durga refers to dark side of the nature. Here Kaal is referred to as time and death. Hence Kalraatri is the one who destroys ignorance and remove darkness. This form primarily depicts that life too has dark side â the violent Mother Nature creates destruction to remove all dirt.
Devi Kaalraatri is the personification of power. Being auspicious she is called "Shubhamkari" too. Trinetri and chaturbhuji are her other names. Her famous shrine is in Calcutta, India.