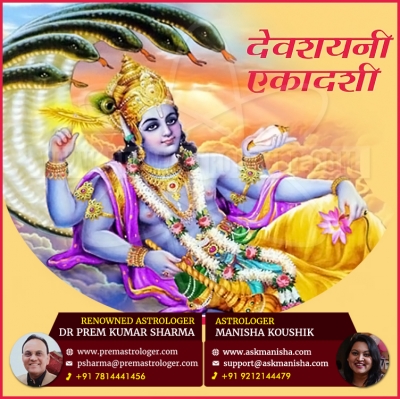 Each word of this Ekadashi represents its own meaning like Dev means Lord Vishnu and Shayani means in placid or sleeping state. It falls in the month of Ashad and also acknowledged by Padma Ekadashi or Ashadi Ekadashi as it is on the eleventh lunar day of the bright fortnight of Asadh month. The day is marked as the dormant state of God over the thousand-headed Sheshnag on the ocean of milk. Lord Vishnu also called as Narayan in which Nara means water on which he rests always. This state continues to be of four months which are Shravan, Bhadrapad, Ashwin and Kartik and sign off on Prabodini Ekadashi Haribodhini, Devotthaani or Utthana Ekadashi in the month of Kartik. It is the period of keeping fast/vrat/or any religious acts.

This Ekadashi signals the beginning of Chaturmas which clears the meaning of time period as Chatur means four. All the known sages tried to be at one place at this time. Lord Vithal will be seen in full glory on this day.

Celebrated in: In Nepal and the Lord Vithal temple in Pandharpur celebrates this time with full swing.

Pooja Vidhi: People usually go to Lord Vishnu temple and dipped into the bhakti of the same by chanting the songs, stories and bhajans.

Significance: Fulfilment of all the materialistic longings and atonement of any wrong doing are the major importance of this period. It is believed that this time is auspicious for marriage purpose. It will bring the happiness, prosperity, pride and lot of name and fame to the devotees. This time you will get the solution of any perennial problem if suffering from. The time is also ideal for any jap, tap, niyam or upavas. People attain moksha after observing the fast.

Legend: According to Hindu scriptures, Hari Shayani Ekadashi Vrata is considered very significant. There is also a popular story behind it. Sage Narada once questioned Lord Brahma about the importance of Harishayani Ekadashi. Lord Brahma told him the story, "There was a great king in Satayuga. His kingdom was suffering from drought for past 3 years. Anxiety spread among citizens. Seeing the severity of the problems, he went to consult a Great Sage Angira. Sage Angira told him that the one and only alternative is that he and his people should fast on Harishayani Ekadashi. Hearing this, the King returned to his Kingdom and followed the sage’s advice. He along with the citizens of his kingdom fasted on this day. Due to this, the kingdom received plenty of rains and people became prosperous and happy.”

Do’s: Milk, fruits and nuts are allowed to take during the vrat.

Don’t: During the time period of slumbering state you should not perform any pooja or havan or kirtans or crematory ceremonies. It is because the whole Dev Lok is virtually on holiday. So if anybody performed such ritual then God will not come at their behest. It will be a wild goose chase. Sun is also seemed to changed its direction and emerge from South. Devotees do not eat vegetables as unseen worms or insects might reside in them which might pollute their mind and body if they consume them. Controlling the sense and avoidance of onion, non vegetarian, grains, cereals and garlic will serve the purpose of the period.