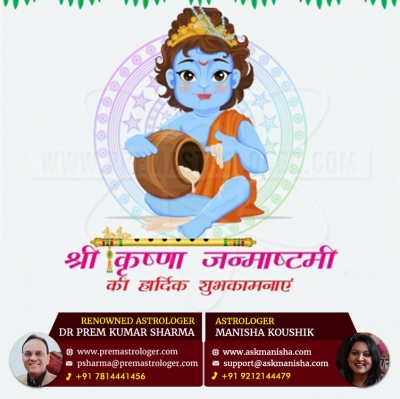 Janmashtami is a festival dedicated to Lord Krishna. It is celebrated every year with a lot of enthusiasm. For Krishna’s devotees, it is quite an important festival. On this auspicious day, Krishna Temples are decorated in a great manner.

Lord Krishna  Is Respected As A Friend Among The Devotees -

Lord Krishna is not only popular as a God among the devotees but considered as a friend among them. For Krishna devotees, there is no one like him. You may not believe that some devotees even cry while worshipping Lord Krishna.

The beauty of temples will surely leave you astonished and surprised when you get to see them. In Mathura and Vrindavan, Janmashtami is celebrated as a very big festival. Whenever the power of any devilish instinct on this earth tries to harm the humankind especially lord Krishna’s devotees, Lord Krishna always emerge as the savior.

Janmashtami and Its Significance –

Lord Krishna took birth on Earth to make their devotees safe and end the life of the sinners Lord Krishna was himself born as a child in the house of one of his devotees known as Vasudev and Devki. Kansa, the son of King Ugrasena of Mathura, tried to kill him but could not get success. Kansa crossed all limits of humanity and his sinners were increasing day-by-day Lord Vishnu they took embodiment of a male body in order to protect the devotees in the trinity groups to liberate the earth from sinners. And then he killed the evil Kansa.

Kansa used to love his sister named Devki a lot. He was doing bid farewell to her cousin Devaki after marriage. On that time, an Akashvaani occurs saying, "Oh Kansa! The Devaki whom you are leaving with so much love and affection, her eighth son will be your death (Kaal).”

After getting this, Kansa could not control his anger and was supposed to kill Devaki. But Vasudev (her husband) pleaded Kansa saying that does not kill her. But Kansa did not agree to this. He put them into prison. Vasudev made a promise to Kansa saying that he will hand over all child of Devki to him right after their birth.

Vasudev followed the same words and handed over one by one each child to Kansa and he killed them. According to the season and the time cycle, as soon as a child was born from Devaki's womb, it was handed over to  Kansa so that the child would bring him to death after fear and virility.

But God has the solution to every problem. Lord Shri Hari Vishnu who took birth from Devki’s womb as embodiment of Lord Krishna says that he should be sent to Nandbaba’s home so that he could remain safe from Kansa. Lord Krishan took birth on a darker night of Ashtami on the eighth day of Bhadrapada Krishna Paksha and at 12 o'clock in the middle of the rain, then the amazing light spread.

And mother Devaki and father Vasudev got unlocked on its own because of Lord’s magic. Not only this but all the guards were also lost in the deep sleep. And then Vasudev left the prison taking Lord Krishna so that he could be safely delivered to Nandbaba’s home. And he brought up the daughter of Nand Rani from Gokul village and leave it in the same place.

After coming back to prison, the entire situation became the same. and then Vasudev hander over the girl he took from there to Kansa. He killed her but then again he gets an Akashvani saying that the child already took birth, he is supposed to kill. It was also told that your time has been born.

And this is the point that devotees keep discussing that who is the mother of Lord Krishna. One who gave birth or the other one who foster him? But he used to consider both of them his mother since he got incredible love from both of them.

Lord Krishna also killed many Demons sent by Kansa in childhood, and as the time came, that sinner was also killed by him. It was the time when God used to take birth on earth to protect the truth and religion.

Sri Krishna Janmashtami is a great festival and fast. It is celebrated with great enthusiasm every year. Fasting also has scientific importance since it takes many diseases, sorrows, and troubles away from your life. Your life gets blossomed with a lot of happiness.

One who worships Lord gets Bhagwat Dham afterlife. The birth anniversary celebration of this god is celebrated with great devotion and devotion, in many countries of the world including India. Moreover, the glory of Shri Krishna Janmashtami is seen all around as he is quite popular because of GEETA.

What To Do On Janmashtami-

On the day of Shri Krishna Janmashtami, one should worship Lord Krishna, ie Shri Hari Vishnu. Devotees do keep a fruitful fast on this auspicious day. They do carry clean clothes on this day. People keep chanting the mantra and Bhajan dedicated to Lord Krishna.

Spend all-day chanting Shri Hari can bring more happiness and peace of mind to you. Devotees must not take Tamasic diet on this day. Do eat fruits on this day.

Performing aarti with duly pleased and reverential faith after worshiping God at 12 o'clock ie birth of night. Then Prasad is offered to Lord Krishna. Due to which sins of births are destroyed. Moreover, there is a custom to donate fruits, dakshina, etc. to Brahmins or needy people. On this day, you can see huge crow at temples. Keeping fast of Janmashtami can bring more happiness to you. Moreover, your wishes are also get fulfilled by the blessing of Lord Krishna.

Janmashtami is a big festival and quite important for the devotees. They do not leave any stone unturned to make Lord Krishna happy and satisfied. This is the festival brings more positivity to the entire surrounding.