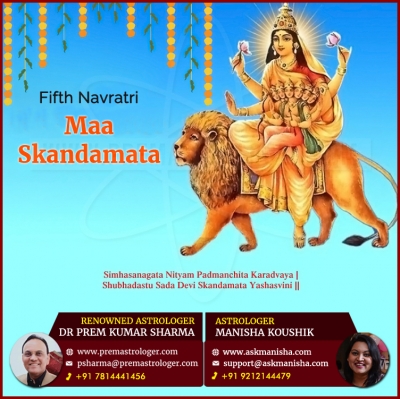 Skandmata is the fifth manifestation of Devi Durga. Since, she is fifth, she is worshipped on the fifth day of Navratri. She appears with four arms and three eyes holding Lord Skanda, her son, in right upper arm and a lotus right lower arm which is slightly raised upward. Her upper left arm is in the blessing mudra (gesture) and lower left arm carries lotus. Devi Maa has golden complexion and sits on lotus or lion. When she sits on lotus, she is called Padmasana too.

Maa Skandmata is considered the goddess of fire. She provides her worshippers the ability of differentiation of right from wrong. By worshipping Devi Skandmata, you will get all your desires fulfilled. You will start tasting Supreme joy even in this mortal world. The gate of salvation will spontaneously get opened for you. Her worship automatically includes the worship of Lord Skand in the child form. Only she has got this pride of place among all the goddesses.

Being the presiding deity of the Sun god, she bestows uncommon luster and radiance on her devotee. He is always surrounded by an invisible divine halo, which always maintains his or her Yoga-Ksema.

As she is the devi of Vishuddha Chakra, she helps her sadhak (striver) activate his or her Vishuddha Chakra which helps them to experience divine tranquility. All the external as well as internal actions of the sadhak stop and his or her mind becomes free of thought-wave, like a wave-less ocean. The mind starts advancing towards pure consciousness. Its the time when the sadhak should be extremely careful and cautious on the path of sadhana.