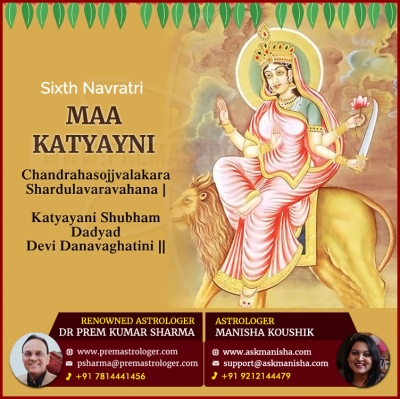 The sixth Shakti is Mata Katyayani who is considered to be the daughter form of Durga. She is the epitome of love, but she can still get angry. She appears with four arms and three eyes sitting on a lion. Her left upper arm holds a sword and the lower left arm holds a lotus; right upper arm is in mudra (gesture) of allaying fears and the right lower in the mudra of granting boon. Her complexion is golden bright and radiant.

Goddess Kaatyayani is considered extremely benevolent and grants every wish of the devotees, especially the wish of getting associated with Lord Krishna. The gopis of Braj worshipped Maa Katyayani only for their desire of getting Lord Krishna as their husbands.

Katyayani Mata is the goddess of 'Aagyan Chakra'. On the path of yogic sadhana, saadhak's (striver) mind enters 'Aagyan Chakra' on this day. When the saadhak surrenders him or her completely, goddess Katyayani provides her darshan (direct vision). The saadhak get access to all the four objects � Dharma, Artha, Kama, and Moksha. Even living in this mortal world, he gets unearthly splendor and influence. Diseases, sorrow, and fear nothing affects him or her in anyway.

Worshipping Mata Katyayani is the best way to get rid of the effects of sins committed in the previous lives.